Cloud computing refers to a broad set of computing and software products that are sold as a service, managed by a 3rd-party provider and delivered over a network.

Infrastructure-as-a-Service (IaaS) is a flavor of cloud computing in which on-demand processing, storage or network resources are provided to the customer.

Sold on-demand with limited or no upfront investment for the end-user, consumption is readily scalable to accommodate spikes in usage. Customers pay only for the capacity that is actually used (like a utility), as opposed to self-hosting, where the user pays for system capacity it is are used or not. 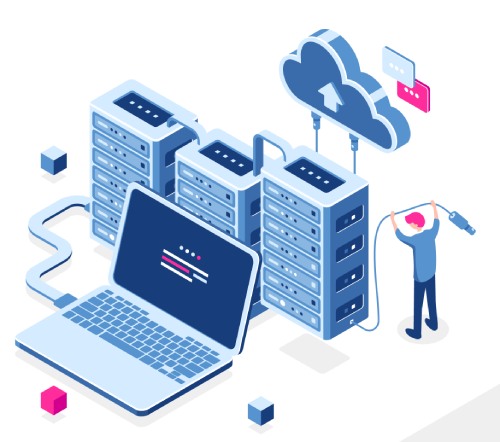 As compared to self-hosting, IaaS is

Inexpensive: To self-host an application, one has to pay for enough resources to handle peak load on an application, at all times. Amazon discovered that before launching its cloud offering it was using only about 10% of its server capacity the vast majority of the time.

Tailored: Small applications can be run for very little cost by taking advantage of spare capacity. Bandwidth, processing and storage capability can be added in relatively small increments.

Elastic: Computing resources can easily be added and released as needed, making it much easier to deal with unexpected traffic spikes.

Reliable: With the cloud, it’s easy and inexpensive to have servers in multiple geographic locations, allowing content to be served locally to users, and also allowing for better disaster recovery and business continuity.

Overall, cloud computing provides better agility and scalability, together with lower costs and faster time to market. However, it does require that applications be engineered to take advantage of this new infrastructure; applications built for the cloud need to be able to scale by adding more servers, for example, instead of adding capacity to existing servers.

In fact, MongoDB is built for the cloud. Its native scale-out architecture, enabled by “sharding,” aligns well with the horizontal scaling and agility afforded by cloud computing. Sharding automatically distributes data evenly across multi-node clusters and balances queries across them. In addition, MongoDB automatically manages sets of redundant servers, called “replica sets,” to maintain availability and data integrity even if individual cloud instances are taken offline. To ensure high availability, for instance, users can spin up multiple members of a replica set as individual cloud instances across different availability zones and/or data centers. MongoDB has also partnered with a number of leading cloud computing providers, including Amazon Web Services, Microsoft and SoftLayer.